RCA Inspiration released Bigger Than Me, the much anticipated fifth album from GRAMMY® and Stellar Award-winning inspirational star Le’Andria. Bigger Than Me was executive produced by Le’Andria, Chuck Harmony, Claude Kelly and Phil Thornton. 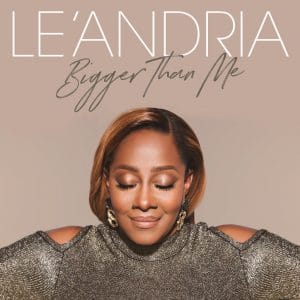 The ten-song album, which features the hit lead single and title track “Bigger Than Me,” not only showcases Le’Andria’s vocal prowess, but her versatility as an artist. On Bigger Than Me, Le’Andria introduces fans to a new sound with a diverse array of songs such as “All I Got,” “Holy Ghost” and “Change Is Now” which range from ballads to up-tempo. She says, “I was encouraged to try new things vocally to bring out new sounds and textures… I was able to be more expressive with this album.”

“All I Got” is the album’s second single and holds a particularly special place in Le’Andria’s heart. Written and produced by Harmony and Kelly, the song was inspired by her brother, Gregory Allen Johnson, Jr., who passed away a short time before she began recording Bigger Than Me. Le’Andria recently released the video for “All I Got,” (https://www.youtube.com/watch?v=Xvmt3n1Lg-Y), directed by Derek Blanks, which she dedicated to her brother’s memory.

Le’Andria hopes that Bigger Than Me will uplift and encourage and help people understand that the things we experience, for better or worse, are much bigger than us. She says, “I want my listeners to never give up! To always know there is a sunny day and you can spread your wings beyond the box – beyond religion, beyond the music. You can live your life in a different way – with unity, loving more and developing your own relationship with God.”

Bigger Than Me is available in-stores and via all major digital providers:

To connect with Le’Andria, please visit: