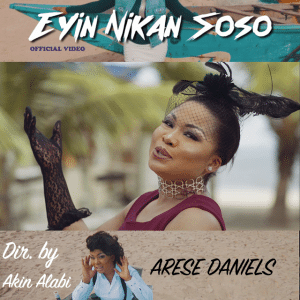 Here is the creatively directed and well choreographed music video by Arese Daniels for her hit single ‘Eyin Nikan Soso’. With a blend of Jazz and African contemporary sound, the song is the second single off her forthcoming album ‘Let it Rain’.

The video was directed by award winning creative director Akin Alabi.
‘Eyin Nikan Soso’ which means ‘Only You’ is Arese’s latest single which is still trending.

‘I wrote EYIN NIKAN SOSO over a span of three years, I was going through some phases at the time, battles within and out, and at the same time I was experiencing effortless victories, hence the testimonial tone of the song, the song became a summary of all I went through at that season of my life, thus describing the all powerfulness of God, the one who hears when we cry, His power to deliver and to save and most of all, His Mercy which never fails’.