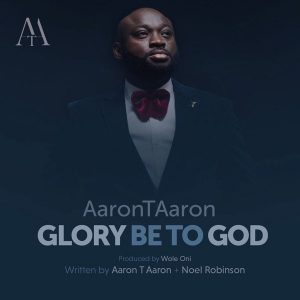 Aaron T Aaron announces that Glory Be To God will be a FREE DOWNLOAD from 1st September 2017 via AaronTAaron.com. This much-loved song is lifted from the forthcoming Album ‘ Right Here, Right Now ’, written by Aaron T Aaron & Noel Robinson, produced by Wole Oni.

Aaron T Aaron is a John Maxwell certified, Speaker, Coach, Trainer in addition to being a Singer, Songwriter, Worship Leader and Mentor. His songs include “Your Name Be Praised”, “Thank You For Your Grace”, “I Will Sing Of Your Praise” and “Double Double”.

He released his first EP in June 2010 entitled ‘ Your Name Be Praised ’. Following this, on October 30th, 2010, Aaron released a worship album entitled ‘ Awesome God ’.

In August 2015 He also went on to release the critically acclaimed ‘ Here & Real ’ which is graced with Gospel music heavyweights from around the world such as Lisa McClendon , Muyiwa Olarewaju , Elvis E , Donna Akodu , and Cobhams Asuquo. In 2016 Aaron T Aaron collaborated with Mike Abdul singing ‘ I Will Sing of Your Praise ’.