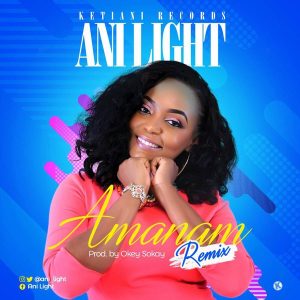 Ani Light is out with the remix of the thanksgiving song off her album “Amanam”.

The uptempo praise is expressive of gratitude to God. It celebrates love with such a joyful mood and it’s significant to the theme of abundant life painted by the lyrics.

Ani Light is an anointed Songwriter, Singer, Worship Leader and Gospel Music Artist. Her first single titled “All You Wanted” was recorded at the age of 9. In 2013, she launched her debut album titled “My Greatest Treasure” which included singles such as “Unto Your Name”, “Amanam”, “So Glorious”, amongst others.