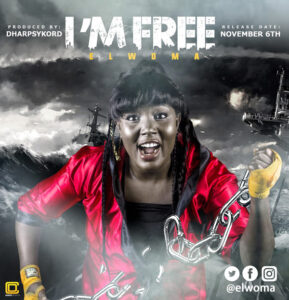 This song is a re-affirmation, a battle cry and a reminder to everyone out there (both Christians and non-believers) that ‘if the Son has set you free, you are free indeed’.

Hence, let go of the fear of yesterday, the sins from yesterday and even today that is haunting you and declare daily that the shackles are broken….. I AM FREE.

Ewomaoghene Luther-Abegunde whose stage is Elwoma is an award winning Gospel Soul Jazz Singer. She released her debut album “POSSIBILITY” in 2012 with songs such as “What Manner of Love”, a wedding song titled “Aloor” and the soft rock song “Dry Bones”.

In 2015 she released two singles and a video – UNFORGIVENESS- a song based on the award winning movie TEMPTING FATE, which was released in cinemas nationwide, NO ONE, an upbeat tempo song that speaks about making your boast in the Lord and having the confidence that if God be for you indeed NO ONE can be against you and the lovely Christmas song titled ‘A KING IS BORN’. And she has gone ahead to release more songs from which she was nominated in two categories in an International Gospel Award- BAGMA.

As 2017 is gradually wrapping up, Elwoma is set to release yet another single titled ‘I’M FREE’. This Urban-pop sound is set to push you to break off every limiting thought holding you bound for if Christ has set you free, you are truly free indeed.

Elwoma is blissfully married to her best friend, mentor and kingdom partner Femi aka Bunnypie and they are blessed with two boys who keeps adding colours to their lives daily.