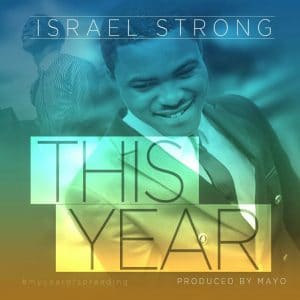 The multiple award winner, Israel Strong, who won the “Songwriter Of The Year 2015” for junior category and had two of his songs nominated for best songs of the year 2015 ( Life of a Winner and The Mandate produced by Kelly Lyon ) has just released yet another hit song titled “This Year“, produced by Mayo Music (aka Michael Oluwole) in this glorious year of Spreading.A product of the LoveWorld Music and Arts Ministry and greatly inspired by the teachings of the prophet of our time, Rev Dr Chris Oyakhilome; Israel Strong was specially introduced to minister this song at the Global New Year’s Eve Service by our man of God, Rev Dr Chris Oyakhilome.
In an interview with this great minister of God in songs, Israel Strong told us about the inspiration of his new single. He said;
“This song was birthed by the Spirit of God and it came to me during my personal prayer and fasting. I wanted to sing a song that was in line with the message of year and God granted my heart desire.”
In addition, Israel Strong expressed his profound gratitude to our great man of God, Rev Dr Chris Oyakhilome for honouring him before the world to the glory of God, saying;
“I’m following my man of God, bumper to bumper.”
[easy_media_download URL="https://www.sugarsync.com/pf/D1594207_06825589_6256537?directDownload=true"
force_dl="1"]

A Techblogger & Also a Gospel Writer.