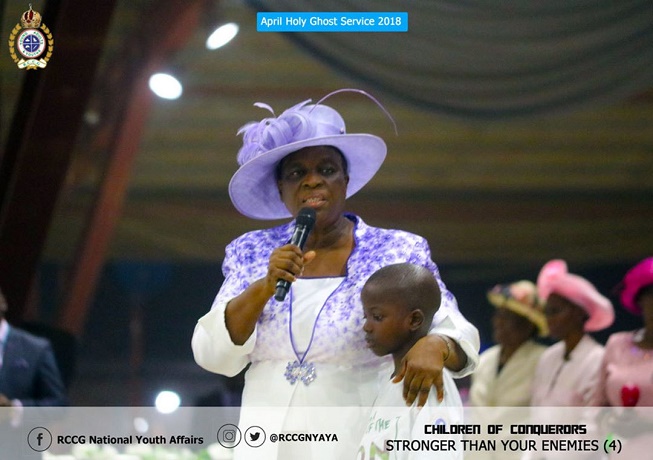 Meet the Child of Conqueror that recited the longest chapter of the Bible, Psalm 119, he recited the complete verse from verse 1-176 at RCCG April Holy Ghost Night 2018.

Samuel Adeniyi, an eight-year-old boy, stunned worshippers of the Place of Refuge Parish of the Redeemed Christian Church of God (RCCG) when he recited Psalm 119 by heart, on Sunday, April 8, 2018, The Nation reports.

Samuel, a primary five pupil of Success-Hill Model Academy Abuja, had earlier done the recitation during the April 2018 Holy Ghost Service of the Redeemed Christian Church of God. This got him a scholarship award from the wife of the General Overseer, Pastor (Mrs.) Folu Adeboye.

While the whole crowd at the Redemption camp was flabbergasted by the ministration of this young boy, The wife of the General Overseer came up to the altar to pray for this boy and also made a statement to the congregation. here's what she said

"This young boy should serve as an example to other children, she also said she was amazed and had to call on the parents of the boy for them to explain how they did it and they Simply said "he learnt to memorize 2 verses each day out of the 176 verses with there help and assistance."

Some of you buy iPads for your children and they watch MICKEY MOUSE all day! Without Knowing any Bible Verse In Their Head!! Ensure your child memorize and learn a scripture every week!

It should be noted that Psalm 119 is the longest chapter of the Bible, with 176 verses. Experts say it is a specially crafted poem with important themes focusing on the Truth and necessity of God’s Word and on His very character.

Speaking to the Nation after the service, Samuel said it took him three weeks to learn the verses.

“I am excited. It took me three weeks to prepare, and I am happy that I have achieved this.”

His Father, Mr. Sofoluwe Adeniyi, an educationist and the proprietor of Samuel’s school expressed joy at his son’s intelligence.

“Watching his academic growth over the years, I can tell you by God’s grace that Samuel can recite the multiplication table up to twenty-five. He is a very sharp boy and I am happy about that.

Speaking on how Samuel was discovered at the Redemption Camp, Mr. Adeniyi said “This is not the first time that he has done long bible recitations. He has done four previous presentations before.

“I just prayed in January, asking God to give him the grace to recite Psalm 119 in full, and here we have it now.  He was just called upon, and he recited it."

Mr Sofoluwe finally thanked the members of the Parish who gave an honorarium offering for him, and also expressed thanksgiving to the wife of the General Overseer for the scholarship