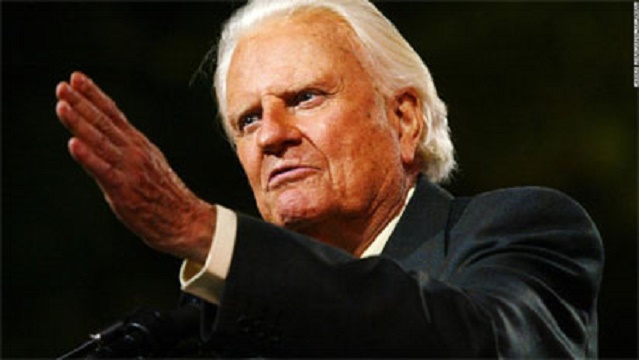 ‘There was nobody like him’ - Trump mourns evangelist Billy Graham

The U.S. President Donald Trump joined other world’s prominent men and leaders to mourn the death of Rev. Billy Graham on Wednesday, Trump was quoted to have called the evangelist “a very special man” who will be dearly missed.

The president as always went to his twitter handle to honor the late evangelist saying, “The GREAT Billy Graham is dead,” “There was nobody like him! He will be missed by Christians and all religions. A very special man.”

The GREAT Billy Graham is dead. There was nobody like him! He will be missed by Christians and all religions. A very special man.

Graham, who transformed American religious life through his preaching and activism, becoming a counselor to presidents and the most widely heard Christian evangelist in history, died Wednesday at age 99.

Graham, who long suffered from cancer, pneumonia and other ailments, died at his home in North Carolina, spokesman Mark DeMoss said.

Vice President Pence called Graham “one of the greatest Americans of the century.” “Billy Graham’s ministry for the gospel of Jesus Christ and his matchless voice changed the lives of millions,” Pence said.

US President, Trump Statement on the Passing of Reverend Billy Graham

Melania and I join millions of people around the world in mourning the passing of Billy Graham.  Our prayers are with his children, grandchildren, great-grandchildren and all who worked closely with Reverend Graham in his lifelong ministry.

Billy’s acceptance of Jesus Christ around his seventeenth birthday not only changed his life—it changed our country and the world.  He was one of the towering figures of the last 100 years—an American hero whose life and leadership truly earned him the title “God’s Ambassador.”

Billy’s unshakeable belief in the power of God’s word to transform hearts gave hope to all who listened to his simple message: “God loves you.”  He carried this message around the world through his crusades, bringing entire generations to faith in Jesus Christ.

In the wake of the September 11th attacks in 2001, America turned to Billy Graham at the National Cathedral, who told us, “God can be trusted, even when life seems at its darkest.”

Reverend Graham would be the first to say that he did not do it alone. Before her passing, his wife Ruth was by his side through it all—a true partner, a wonderful mother, and a fellow missionary soul.  He also built an international team and institution that will continue to carry on Christ’s message.

Melania and I were privileged to get to know Reverend Graham and his extraordinary family over the last several years, and we are deeply grateful for their love and support.

Billy Graham was truly one of a kind.  Christians and people of all faiths and backgrounds will miss him dearly. We are thinking of him today, finally at home in Heaven.